With September, Spooky Season, otherwise known as THE BEST TIME OF THE YEAR, has officially begun. How am I defining Spooky Season, you ask? Well, I’m pretty flexible about it. For me, Spooky Season begins in September and ends when November does. It’s not just about Halloween for me; it’s more about autumnal vibes, which last past October.

If you couldn’t already tell, this is my absolute FAVORITE time of the year, when I am imbued with energy and am even more obnoxiously upbeat and joyous than usual. The chill in the air, the anticipation of Halloween, spooky vibes, hot chocolate, cider and pumpkin treats, cozy socks and sweaters, crunchy leaves…and creepy, Gothic books! A great time, I tell you!

So here’s 25 books I plan to read within the next three months to make this wonderful time of the year even better!

The Once and Future Witches

Alix E. Harrow’s highly anticipated second novel is a historical fantasy featuring witches and I think suffragettes, something about Salem, and lots of fake news articles. I’m very excited to return to her beautiful, whimsical writing and what better time to read a Victorian book about witches?

I read and adored Laura Purcell’s first novel, The Silent Companions, a couple of years ago: it was a perfect Gothic read. I immediately purchased her sophomore novel, but convinced myself that I wouldn’t read it until I’d read Sarah Waters’ Affinity, which shares a very similar plot. But I don’t know if I’m in the mood to read Sarah Waters any time soon and I really want to read another Purcell book, especially as it seems Gothic Horror is very much going to be her brand!

And the Trees Crept In

I’ve read two of Dawn Kurtagich’s other books and this is the only one of her oeuvre left. While neither of the other two were favorites, I highly enjoyed both of them and thought that they definitely delivered on the creep factor; Kurtagich excels at creating terrifying atmosphere. This one in particular features a creepy manor surrounded by creepy trees, which sounds perfect for the season.

I’ve had this on my TBR for a long time, but now that there’s a Netflix show coming later this month, I decided to prioritize it (though I hear the Netflix show is very different). This book is definitely polarizing, and a lot of people absolutely hate it, so of course I’m super curious. The ending is supposed to be crazy and the whole thing horrifying so of course I’m super excited!

Catherine House was a highly anticipated release for me, since it’s a combination of Gothic and Dark Academia; it’s about a girl attending the mysterious titular school and weird shit goes down. Since this book’s release, it has gotten extremely mixed reviews, to say the least, and currently holds an average Goodreads rating of 3.11, which is unusually low. However, I’ve seen several people with tastes similar to mind quite enjoy it, so I’m still willing to give it a try. Plus, the author is a Black woman, which you don’t see very often in Gothic horror!

I absolutely loved T. Kingfisher’s other horror novel The Twisted Ones, so I would have picked up any other horror-themed thing she decided to put out. This one is about a woman exploring her uncle’s bunker, which she realizes may lead her to alternate (and terrifying) dimensions. Sounds intriguing!

I’ve heard very good things about this YA horror novel about a girl whose sister disappears and she delves into a potentially haunted forest in the hopes of searching for answers. Most people I know who have read this can’t stop talking about how creepy it is.

Another somewhat polarizing book, people seem to either love or hate this very short horror book about a psychiatrist dealing with a particularly frightening patient in a New England mental hospital. Honestly, I feel like part of that is because many readers are quite particular when it comes to tropes involving mental health, which is perfectly understandable. I’m much less particular, so I’m predicting I’ll enjoy it.

I don’t quite remember how this strange indie book came across my radar, but it’s about a girl who is destined to die and tries to run away from her fate. It sounds like it’s going to be beautifully written and whimsical with a dash of magical realism, which means I may end up absolutely hating it, as I tend to have a very hit-or-miss relationship with both whimsical and magical realism. Still, it’s a short book, and it’s got a very interesting conceit, so I’m excited to give it a shot. And I really love the cover!

I don’t think I can describe this better than the book’s marketing does, so: “Stranger Things meets World War Z in this heart-racing conspiracy thriller as a lonely young woman teams up with a group of fellow outcasts to survive the night in a town overcome by a science experiment gone wrong.” Small town? Bizarro science? Scientific experiments gone wrong? Violence galore? Sounds like my kind of book!

The Cabin at the End of the World

Not quite sure what to expect from this one, as it’s got a rather low Goodreads rating and seems to be quite polarizing, but it’s also a very famous horror novel by a very well-known writer of horror! I bought this as a cute little mass market from Target like two years ago and would like to finally see what all the fuss is about.

This is being marketed as “The Blair Witch Project meets Midsommar” which really does sound incredible; it’s about a documentary filmmaker making a movie about a village whose population disappeared. It sounds absolutely fascinating. It’s also translated, I believe, from the original…Swedish, I think? Translated fiction is often a hit or miss with me, but I think the author herself translated this?

Night of the Mannequins

This little novella by the author of the much talked about The Only Good Indians promises horror and comedy in equal amounts. This is how it begins: “So Shanna got a new job at the movie theatre, we thought we’d play a fun prank on her, and now most of us are dead, and I’m really starting to feel kind of guilty about it all.” I mean. Sounds excellent, and only 144 pages.

Another horror novella, but this one is high fantasy! It seems to have something to do with plague; I’m not super clear on the details but I’ve heard very, very good things, and it’s super short at 131 pages, so I have high expectations for it to be very fast paced. Not entirely sure what makes it horror but excited to find out!

I’ve had this one on my list for a long time, but have just been waiting for my hold to come in from the library, and that should happen within the next couple of weeks, hopefully! It’s a “dystopian psychological thriller [that] follows an American academic stranded at a Swiss hotel as the world descends into nuclear war—along with twenty other survivors—who becomes obsessed with identifying a murderer in their midst after the body of a young girl is discovered in one of the hotel’s water tanks.” Comes highly recommended (Callum loved it!) and seems like an appropriately hair-raising novel for current times.

Another one I’ve had on my TBR for ages and ages, along with everything else by this author, and yet I’ve still never picked up any of his books. I keep hearing high praise for this one, and it’s all about vampires and it’s supposed to be very bloody and violent, so I’m excited.

It is so fascinating to me how many of these books seem to be polarizing or have low Goodreads ratings. This one is about a mother and daughter burned for witchcraft and how that event has turned into an urban legend that affects our present day characters in various ways. The summary is kind of vague, but I’ll read anything to do with witches.

The Lamb Will Slaughter the Lion

This is a little novella about a queer punk rock traveller who finds herself in a town where the residents have summoned a “blood-red three-antlered deer” to protect them, but it’s turned against them instead. I’m hoping for Gothic Midwestern vibes (since the aforementioned town is in Iowa).

The latest from Riley Sager, this one is about a haunted house, and the daughter of a famous horror novelist who wrote an account of their lives in said house. When she goes back to renovate the house to sell it, weird things start happening.

I’ve not read Danforth’s other novel, but this one is so different that it really doesn’t seem like that will matter in any way. This is a Dark Academia novel with two different timelines about a group of girls in in a weird school, featuring a story within a story and lots of metanarrative. I’ll be honest; I’ve read the Goodreads summary like three times and still have no idea what to reasonably expect, but it’s fun to go in blind sometimes. 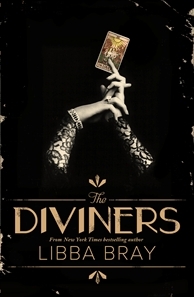 I read the first novel in this series way back in 2013, when it first came out, because I was a big fan of Libba Bray. I have since forgotten nearly every single event that happened in the book, because of course I have, and I told myself I would wait until the series was complete and then binge it all at once. Well, nearly seven years later, the series is complete, and I plan to binge it all in October! I am very excited!

Most likely I will save this book for the very last and read it at the start of December, because the cover and summary give off more wintry vibes rather than Spooky Season vibes, but hey, it’s still a thriller, and one I definitely want to prioritize! It’s a locked room mystery, my favorite, featuring a group of people trapped in a ski lodge.

Well, this feels like a lot, but hopefully I will get to all of these in the next three months! Have you read any of these books? Planning on reading any of them soon? Let me know!

5 thoughts on “25 Books for a Spooky Season TBR”