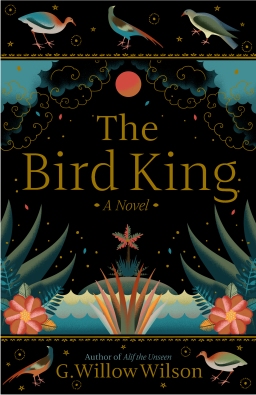 Al-Andalus is a gilded vision imprinted into the minds of many Muslim children, myself included. It is a dream of glory days long past, the Golden Age of the Islamic Empire, a time of prosperity and tolerance. The Bird King begins not in the midst of this glory age, but at the door of its downfall: the year is 1491. Queen Isabella and King Ferdinand have laid siege to Granada, the last remaining stronghold of the great empire of Muslim Spain, tenuously held by the sultan and his retinue.

Against the backdrop of this landscape we are introduced to the novel’s protagonist and only POV character, Fatima, the sultan’s Circassian concubine, who has lived in the harem all her life. Fatima, though endowed with all the comforts of a beloved mistress, is keenly aware that she is still nothing more than a slave, and she deeply resents this. She is an intriguingly complex heroine; stubborn and sheltered, furiously angry and furiously loving, honest and straightforward. She is desperate for freedom, even as the narrative continues to probe at this desire and interrogate its true worth; when Fatima eventually leaves the palace and its comforts, she reflects on her newfound freedom: “[Fatima] was free, and though freedom was neither happiness nor safety, though it was in fact a crueler and lonelier thing than she could have imagined, it was real, just as the ship was real, and like the ship, it was hers.

Fatima’s only true friend in the palace is Hassan, the royal mapmaker, who has a strange ability: he can draw maps of places he’s never seen and alter reality with his drawings. Their friendship, though frowned upon, is allowed to continue because Hassan is gay. In fact, Fatima states outright that Hassan’s lack of interest in her body is one of the reasons she loves him so deeply; Fatima, who is beautiful enough to turn heads, has always despised that her sexual allure seems to have become her defining trait. Hassan, too, is an endearing character, somewhat hapless, relatively happy-go-lucky, and charming.

The deep spiritual love Fatima and Hassan have for one another is the blazing emotional core of The Bird King. As this review states, their love is almost tragic, and its depiction functions as a way for Wilson to interrogate the basic notion of love itself: “They love one another on a deep, spiritual level, but their sexualities are incompatible. To find true fulfillment, they have to learn to share one another more generously with others, which is no easy task for people who were taught that love is possession. Like freedom, love is a far more delicate and difficult proposition than it initially appears.

It is this shared love that instigates the inciting incident: when a coterie of Spaniards arrive to negotiate with the sultan, they bring with them a lay sister called Luz, sent as an agent of the queen. When Luz discovers Hassan’s ability, she is convinced that he is a sorcerer communing with the devil, and becomes determined to torture him until he confesses, prompting Fatima and Hassan to flee the palace with the help of Lady Aisha, the sultan’s mother (and a fascinating character in her own right), and Vikram, a jinn beholden to Lady Aisha.

Thus begins Hassan and Fatima’s journey to the legendary Qaf, where they hope to find the titular Bird King. Though I normally don’t enjoy journey narratives, I found myself riveted by Hassan and Fatima traipsing across the Spanish countryside, desperate to get to the ocean. This is because these characters, and their dynamic, is absolutely delightful. Alongside them is Vikram, a jinn who is at times a dog and at times a man and at times neither of these things, who has a long-suffering, dry sense of humor, and whose presence livened the narrative considerably, even if he was occasionally utilized as a deus ex machina.

Other characters who color the narrative are Gwennec and Luz. Gwennec is a grumpy fisherman-turned-monk whom Hassan and Fatima stumble into, literally, and he finds himself caught along on their journey of escape. Luz is much more interesting; she is a fascinating depiction of a female villain. From the get-go, it is clear that her affability is a shroud for a crueler, keener nature; she is driven by a fanatical belief in her God and her church, and it drives her to cruelty. Her nature only grows worse when she is overtaken by a strange, eldritch evil that Hassan and Fatima accidentally set loose during their harried escape from the palace. It’s true that the narrative is undecided on what exactly this eldritch evil is or what its goals are, but it becomes clear that this is not the point, as this being, and its attachment to Luz, serves only as a metaphor for the nature and function of evil itself.

After much back and forth, our ragtag team does indeed manage to find the legendary Qaf, and here is where the narrative began to grow murky, though no less enchanting. The Bird King is actually a retelling of an esoteric 12th-century poem by a Persian mystic, called The Conference of the Birds, which, in the book, is a poem known by Hassan and Fatima, though they do not know how it ends. It is, to the best of my understanding, a metaphor for humans seeking God, and is, I believe, part of a larger tradition of Islamic mysticism, or Sufism, that has always fascinated me but that I am unfamiliar with (mainly because my tiny Muslim corner of the world believes Sufism to be heretical). The poem deals in large part with aspects of the metaphysical, the sorts of things difficult to wrap one’s brain around. In the latter part of the novel, The Bird King attempts to tackle these metaphysical conundrums, and everything makes much more sense when you refer back to The Conference of the Birds. Devoid of that context, the narrative becomes a bit muddled and difficult to follow (at least for me, who is totally unfamiliar with the philosophy of metaphysics), but there is a sense of something grander at play, a feel of awe that eclipses the reader with its potential.

The Bird King is a novel that is greater than the sum of its parts. Read entirely straight, it is simply a moving, often hilarious romp featuring endearingly complex and sometimes comical characters, a tale of deep friendship and a desperation for freedom, with a dash of magical realism. But if you care to look past that, you see a novel begs to be dissected and compared against the inspiration it is meant to be retelling, a novel that wants to interrogate the nature of faith and divinity, of love and freedom, of the human condition and humanity’s relationship to God. It feels like a book that is beyond anything that I could ever hope to fully understand, and I loved it.

I loved it not just because I loved the characters, or Hassan and Fatima’s deep love for one another, or because I found it funny and fun, though all those reasons are valid too. But mainly I loved it because I connected to it on such a deep emotional level that I can barely even articulate it. I so rarely read books that pull heavily from Islamic history and tradition, and perhaps this is part of why so many reviewers found the narrative slow and distant, because so many aspects of it are unfamiliar to Western readers. For me, The Bird King felt like coming home.

cabin weekend!
I woke up this morning to find that this little contortionist had wriggled out of his sweater. 😒
My first book of the year was a resounding success! IRON WIDOW is a YA SFF with an unhinged heroine, giant mecha, and polyamory! It was such a fun time.
here’s to a happy and cat-filled 2022
Finally doing the whole “writing at a cafe” thing, complete with brown sugar bubble tea.
This will either be my last read of the year or the first book I finish in 2022, depending on how my reading goes…sadly I still seem to be in a bit of a slump. So far, though, I’m liking DETRANSITION BABY — the writing is extremely sharp and clever; I’m finding myself constantly pausing to reread sentences just to savor how well-constructed they are.
Shaping up to be one of my favorite books of the year is Clint Smith’s HOW THE WORD IS PASSED, an examination of America’s history of slavery and racism through the lens of various significant locations locations such as Monticello, Angola Prison, Blandford Cemetery, and more. Smith does a fantastic job weaving information about these locations with historical facts about slavery and racism; it all flows seamlessly, and the descriptive writing is gorgeous.
Visited Bedford for the first time for a late lunch with @olivia.rf at @pilarcubaneatery!
This was my first time trying jerk chicken and I can safely say I am a fan. Also my first time properly trying collard greens and omg, if they all taste like these then I am a devotee!!!