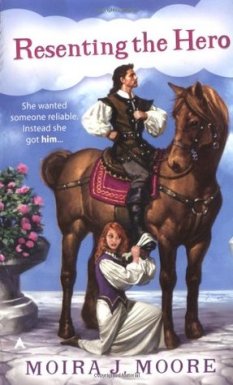 Oh my God, this book is so good. This is what Gideon the Ninth wanted to be, a fantasy with comedic elements, modern sensibilities, and an irreverent, casual tone. Only Resenting the Hero is compulsively readable and engaging.

The heart of the novel is the relationship between the two main characters, Dunleavy and Taro, and it works because they are so different, and so flawed. Dunleavy, in particular, is a hard person to like. She’s the narrator, and the story is told in first-person, so we’re constantly privy to her judgemental thoughts, and oh boy, is she judgemental! She’s also inexperienced, naive, a little full of herself, cold, overly logical, and has little to not emotional intelligence. In other words, she’s an extremely unlikable heroine, so naturally I liked her a lot. Her gradual thawing towards Taro is wonderful to watch, especially considering he is not what I had expected at all!
Dunleavy’s narration is what really makes this book shine, though. She’s hilarious. She’s so dry and witty and takes everything in stride, so her internal monologue is just really funny. It’s so rare that I can find high fantasy that can truly be called comedic, but this book truly was just laugh out loud funny. Even when things were dire, Dunleavy was being sarcastic, so it made the whole thing ten times funnier.

Which is not to say it didn’t deal with serious topics! On the contrary, this was a fantasy that had oddly modern sensibilities. Things like assault and violence were addressed head-on in the same sort of direct way they might be addressed in the modern world, and issues of equality between Sources and Shields and their institutionalization were brought up in an engaging way. All of this was was brought together into a really intriguing, page-turning mystery that I thought was constructed really well, even if the plot sometimes felt episodic. But I think that was partly because the author just liked to get to the damn point; this is a short book, and I think that’s because this author isn’t interested in wasting too much time waffling around. She writes what needs to get written, and if that means some things happen a bit too fast sometimes, or the reader has to extrapolate some development, then that’s just what happens, and I loved that so much, because so often fantasy is just heavy with thousands of words it just doesn’t need, and drags the plot down. This is the first fantasy book I’ve read in a long time where I can truly say that it was the perfect length. And I wouldn’t have complained if it had been a tad longer.

I just want to stress how much damn fun this book was! I read it in like two days. I could not put it down. It cheered me up. It made me smile. It’s definitely going to be a favorite of mine, and I cannot wait to read the rest of the books in the series, which feel almost like seasons of a TV series, but I could definitely see this series being adapted for television if some creator out there feels like leaning really, really hard into the whole “comedy-fantasy” genre! Because this book is basically Galavant meets Gideon the Ninth meets Pride and Prejudice, and what a wondrous marvel of a TV show that would be.

cabin weekend!
I woke up this morning to find that this little contortionist had wriggled out of his sweater. 😒
My first book of the year was a resounding success! IRON WIDOW is a YA SFF with an unhinged heroine, giant mecha, and polyamory! It was such a fun time.
here’s to a happy and cat-filled 2022
Finally doing the whole “writing at a cafe” thing, complete with brown sugar bubble tea.
This will either be my last read of the year or the first book I finish in 2022, depending on how my reading goes…sadly I still seem to be in a bit of a slump. So far, though, I’m liking DETRANSITION BABY — the writing is extremely sharp and clever; I’m finding myself constantly pausing to reread sentences just to savor how well-constructed they are.
Shaping up to be one of my favorite books of the year is Clint Smith’s HOW THE WORD IS PASSED, an examination of America’s history of slavery and racism through the lens of various significant locations locations such as Monticello, Angola Prison, Blandford Cemetery, and more. Smith does a fantastic job weaving information about these locations with historical facts about slavery and racism; it all flows seamlessly, and the descriptive writing is gorgeous.
Visited Bedford for the first time for a late lunch with @olivia.rf at @pilarcubaneatery!
This was my first time trying jerk chicken and I can safely say I am a fan. Also my first time properly trying collard greens and omg, if they all taste like these then I am a devotee!!!