I hadn’t planned on doing a themed TBR, so as of now I’m still reading what I carried over from January. That is, I’m finishing up Katherine Arden’s Winternight trilogy and Laini Taylor’s Daughter of Smoke and Bone Trilogy. I’m reading the finales of both right now! However, I really, really hope to get some major reading done this weekend and at least finish The Winter of the Witch, so I can get started on my themed TBR.

But without further ado, let’s get to the books I want to read for Black History Month!

Hannah Mary Tabbs and the Disembodied Torso: A Tale of Race, Sex, and Violence in America
Kali Nicole Gross 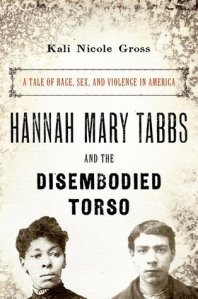 Shortly after a dismembered torso was discovered by a pond outside Philadelphia in 1887, investigators homed in on two suspects: Hannah Mary Tabbs, a married, working class, black woman, and George Wilson, a former neighbor that Tabbs implicated after her arrest. As details surrounding the shocking case emerged, both the crime and ensuing trial — which spanned several months — were featured in the national press. The trial brought otherwise taboo subjects such as illicit sex, adultery, and domestic violence in the black community to public attention. At the same time, the mixed race of the victim and one of his assailants exacerbated anxieties over the purity of whiteness in the post-Reconstruction era.

I’m not sure how I stumbled across this odd little book, but it will be my first foray into true crime. The lurid nature of this case – mixing sex and murder and race – is fascinating to me, but the time period makes it doubly so; the 19th-century is my favorite time period, so I’m very excited to read about this weird little pocket of history.

So You Want to Talk About Race
Ijeoma Oluo

Editor at Large of The Establishment Ijeoma Oluo offers a contemporary, accessible take on the racial landscape in America, addressing head-on such issues as privilege, police brutality, intersectionality, micro-aggressions, the Black Lives Matter movement, and the “N” word. Perfectly positioned to bridge the gap between people of color and white Americans struggling with race complexities, Oluo answers the questions readers don’t dare ask, and explains the concepts that continue to elude everyday Americans.

I’ve admired this author’s work on The Establishment for years and years, and then this book came out! I’m not really sure why it’s taken me so long to read it, but I’m glad to finally be getting around to it!

White Fragility: Why It’s So Hard for White People to Talk About Racism
Robin DiAngelo 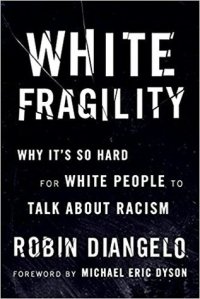 Referring to the defensive moves that white people make when challenged racially, white fragility is characterized by emotions such as anger, fear, and guilt and by behaviors including argumentation and silence. These behaviors, in turn, function to reinstate white racial equilibrium and prevent any meaningful cross-racial dialogue. In this in-depth exploration, anti-racist educator Robin DiAngelo examines how white fragility develops, how it protects racial inequality, and what can be done to engage more constructively.

At ALA Midwinter 2019, this past month, Robin DiAngelo was the keynote speaker. It was a fraught conference overall, with many incidents of harassment targeted at black women and people walking out of DiAngelo’s talk. This is such an important topic and it is so timely; I can’t wait to read it. 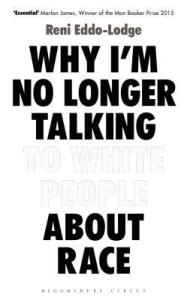 Exploring issues from eradicated black history to the political purpose of white dominance, whitewashed feminism to the inextricable link between class and race, Reni Eddo-Lodge offers a timely and essential new framework for how to see, acknowledge and counter racism. It is a searing, illuminating, absolutely necessary exploration of what it is to be a person of colour in Britain today.

So here’s something: I know literally nothing about black history in Britain. But I certainly want to. I’ve heard great things about this book from British book bloggers, so I’m looking forward to picking this up! 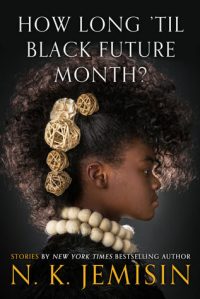 In these stories, Jemisin sharply examines modern society, infusing magic into the mundane, and drawing deft parallels in the fantasy realms of her imagination. Dragons and hateful spirits haunt the flooded city of New Orleans in the aftermath of Hurricane Katrina. In a parallel universe, a utopian society watches our world, trying to learn from our mistakes. A black mother in the Jim Crow south must figure out how to save her daughter from a fey offering impossible promises. And in the Hugo award-nominated short story “The City Born Great,” a young street kid fights to give birth to an old metropolis’s soul.

And finally, the only fiction book on this list, and written by my favorite author at that! I adore N.K. Jemisin’s writing, long and short form, and I had already planned on reading at least one short story collection this month, so this is very fitting!