My final OwlCrate box! My final book box! I adore OwlCrate, even more than I adored FairyLoot, but alas, I need to be more financially circumspect in the coming year. So, anything that’s not necessary has to go! Plus, I’ve been getting less and less interested in YA fantasy, and they tend to make up the bulk of OwlCrate books, so…yeah.

I was 99% certain what the book of the month was going to be, and I was right! I’m tentatively excited about it because it’s gotten some good reviews, buuuuut I’ve been burned by hyped books before, so we’ll see. 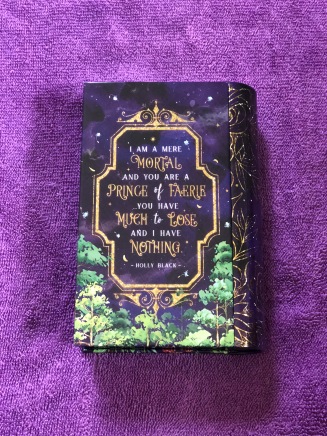 First item is a book-shaped tin box! I looooove this item; I have so many tiny bits and bobs lying around that I’m really pleased to have something to keep all my crap in. Plus it’s got some lovely quotes from The Cruel Prince!

According to the spoiler card, that is an authentic agate ring. It’s gorgeous, but it’s also huge! I generally don’t wear rings, especially such large ones, but I do love the stones, so I might try to turn it into a necklace. The other item is a pocket mirror! I already have a pocket mirror, custom made with my name written on it in Arabic, so I gave this mirror to my mom.

Magnetic bookmarks! I think magnetic bookmarks are more trouble than they’re worth, personally. These are really cute, but I’m probably not gonna use them, so for now they’re hanging out on my white board.

There’s a print with a quote from Jodi Meadows’ Before She Ignites. It’s pretty! And then, my other favorite item in this box is a tea towel inspired by Sarah J. Maas’ Throne of Glass series. I looooooove the quote and I think the towel itself is so gorgeous. I ended up hanging it on my wall; I’m definitely not going to use it as a tea towel (fun fact: I had to google what a tea towel actually is!).

And our book is Grace and Fury by Tracy Banghart! It’s been getting a lot of hype recently, and it was the FairyLoot pick last month. It’s about two sisters in a patriarchal world and is supposed to be all about sisterly love, so…we’ll see. Like I said, tentatively excited.

And that’s it for my final OwlCrate box!

One thought on “OwlCrate August 2018 Unboxing!”