Hi guys! So, I realize I popped in yesterday and dropped a book review, then bounced again.  Booktubing is going as well as it can, but frankly? It’s way too freaking hot to film. There’s no way I can film while my AC unit is on, because it’s like thirty years old and it’s fucking loud. I can’t even really have a fan on, because I film with my phone, and even though I have a mic the interference really sucks.

Plus, honestly, I think I’m more into blogging-by-writing, anyway. I’m just never as natural as I want to be when I’m speaking. Which is not to say that I’m abandoning Booktube! I’ll still post unboxings, hauls, and monthly wrap-ups over there, and maybe the occasional tag, but for now I think I’m going to rededicate myself to this blog, which I’ve missed a great deal!

So, I stumbled upon this tag over at The Literary Phoenix – well, “stumbled” is the wrong word to use, since I was actively looking for a tag! But anyways, without further ado, let’s get to the tag!

Find a book on your shelves with a pink cover. What made you pick up the  book in the first place? 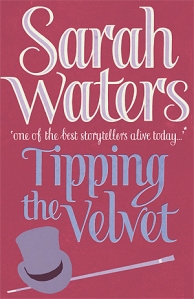 I discovered Sarah Waters in a very roundabout way. On Tumblr, I came across gifsets of the Korean movie The Handmaiden, which is an adaptation of Sarah Waters’ novel Fingersmith. At the time, I knew nothing at all about Sarah Waters or her books, but I just knew that The Handmaiden seemed like a really cool movie, especially as it was marketed as lesbians and criminal intrigue. I watched The Handmaiden, and it ended up being one of my favorite movies of all time. So, naturally, I had to read up a bit on the book it was originally based on, which led me to Sarah Waters.

Because I had just watched The Handmaiden, I didn’t feel like reading Fingersmith, so I looked into Sarah Waters’ other books. I couldn’t make a decision, but then I was in a used bookstore in my neighborhood and I found this gorgeous, vibrant edition of Tipping the Velvet. Upon reading the summary I discovered it was all 19th century London, dance halls, and lesbians, and that’s pretty much the way to my heart.

Think of a book you didn’t expect to enjoy but did. Why did you read it in the first place?

In 2016, when The Star-Touched Queen was published, it was all the rage. It was a very splashy debut novel that everyone was talking about. Thing is, it wasn’t all good. Opinions on this novel were vastly divided. It seemed this was the sort of book people either loved or hated. Personally, I was a little iffy about the summary, which made it seem like the book would be the sort of romance-heavy, instalove that I tend to despise, but I was intrigued by the folks who said that Roshani Chokshi’s writing was the most gorgeous writing they had ever read. Since opinions were so divided, I got curious! I thought I would like the writing and hate the romance plot.

I ended up enjoying it very much. I gave it four stars because I found the plot a little lacking, but I was smitten with the writing, which is indeed gorgeous. I have a high tolerance for what others deem purple prose, so I was enchanted with Chokshi’s lyrical writing. I also thought the romance was really well done, surprisingly!

Stand in front of your bookshelf with your eyes closed and pick up a book at random. How did you discover this book?

Full disclosure, I’m too lazy to get up and do this right now, plus most of the books on my bookshelf I haven’t actually read (oops), so I’m just going to choose a book at random from this year’s reads, on Goodreads. So, my finger landed on Girls Burn Brighter.

This was another splashy debut and it made waves in the adult literary community.  People were marking it as to-read on Goodreads and the cover is very, very eye-catching, so I had to check it out. Plus, my friend Rachel was really excited about it, so it was on my radar, and then I stumbled across on Netgalley, so Rachel and I buddy read it (I think?).

Pick a book that someone personally recommended to you. What did you think of it?

This is going to be one of my favorite books of the year, if not of all time. Here’s the thing: I don’t tend to read adult literary, and when I do, I don’t really find myself loving it as much as I loved this book. I usually struggle to connect with the characters, mainly. But Home Fire? I loved it so much. It’s a modern-day retelling of Antigone with an all-Muslim cast of characters, and it has the distinction of having the most beautiful and tragic ending I’ve ever read in my life.

Home Fire was recommended to me by Rachel, who was reading all the books on the Women’s Prize Shortlist (Home Fire ended up winning!). She was a little hesitant about recommending it since, as I said, I don’t generally read adult literary, but I was intrigued by the plot and that it was a retelling of Antigone, a play I had been meaning to read. So I picked up a copy of the play, read it, and then right away I picked up Home Fire. Since I had found Antigone somewhat lacking in emotional resonance (I generally don’t like plays), it was fantastic to read Home Fire right after and get all that emotion I had been hoping for from Antigone, which has such incredible themes.

My one gripe? I wish the covers weren’t so fucking ugly, so I could buy a copy of this book!! But both the US and the UK covers are horrific and meaningless.

Pick a book you discovered through book blogs. Did it live up to the hype?

I have a thing about Victorian London. Frankly, if a book is set in Victorian London and has those Victorian Vibes (you know what I’m talking about), there’s a 99% chance I’m going to pick it up regardless of what it’s actually about. So, when I stumbled across Stalking Jack the Ripper, I immediately knew I had to read it. People were excited about it, it seemed to be a popular series (this book has a 4.02 on Goodreads!), and I kept seeing it everywhere!

Sadly, it did not live up to the hype. My main problem was that this book was boring. It’s really short, but it draaaaaaged. There was just a lot of nothing going on. Plus, it was seriously anachronistic with its characterization. Audrey Rose read like an overeager college freshman who’s majoring in Women’s Studies, not a Victorian-era young woman. It was a bit much. To add insult to injury, there’s no other major female characters besides Audrey Rose.

I didn’t hate this, however. I didn’t mind the romance, surprisingly, and I thought it was atmospheric. I’ve heard good things about the second book in the series, so I acquired it on my Kindle and it’s waiting to be read. I’ll probably get to it sometimes later this year!

Find a book on your shelves with a one word title. What drew you to this book?

Again, we’re going with virtual shelves here, and my pick is Mirage by Somaiya Daud. I first heard of this book on Twitter, when the book deal was announced, so I’ve been anticipating it for a long, long time. What drew me to it was that the author is Maghrebi and the book is inspired by North African culture. Being North African myself (though Egyptian, not Maghrebi, two very different things), I was immediately excited by the prospect of this book. When a detailed summary of it came out, I was a bit less excited, but I tried to withhold judgement.

Unfortunately, I did not love it. I didn’t hate it, either. I gave it three stars and wrote a lengthy review on Goodreads (which I might post here retroactively, maybe). Mainly, I found it predictable. It felt like the same old YA plot tacked onto a different settling. Plus there was a really jarring mishmash of Olden Times setting and modern sci-fi setting that I kind of despised. I did think the writing was really good, though, so I’ll probably look into Daud’s other work!

What book did you discover through a film/TV adaptation?

Never, never have I ever seen a source material that is so radically different from its adaptation. And thank goodness, frankly, because this is godawful source material.

A few years back I discovered the popular fantasy series Legend of the Seeker. After a few false starts (the pilot episode is a bit slow), I finally binged it all, and I fell in love. It was beautifully filmed (in New Zealand!), with fantastic characters and relationships, along with light-hearted humor. I also liked various elements of the fantasy world. I was devastated when Legend of the Seeker was cancelled, so I thought, hey, why not check out the source material?

The Sword of Truth series is garbage fantasy. That may seem harsh, but trust me. This is everything you don’t want in fantasy – it’s got generic Anglo-Medieval worldbuilding, a Gary Stu white male hero who all the ladies want to bone, disgusting amounts of misogyny and sexual violence, and cartoonishly evil villains. Wizard’s First Rule isn’t the worst of the books, but I hated myself enough to read three more books in the series, and they just got progressively worse and more misogynistic. Seriously, there is SO MUCH unnecessary sexual violence in these books!

Also, I’ve heard Terry Goodkind is an asshole in real life, which frankly doesn’t surprise me.

Think of your all-time favorite books. When did you read these and why did you pick them up in the first place?

Hmm…what are my favorite books of all time? I don’t think I’ve kept track. Because I don’t really have a single favorite book, I’m gonna pick one that comes close and that I think is sadly underrated. That book is Silvia Moreno-Garcia’s The Beautiful Ones.

In a world where people are always vying for Pride and Prejudice spin-offs, adaptations, and reimaginings, I don’t understand why The Beautiful Ones isn’t more popular. It’s a gorgeously written book, with old world elegance, light fantasy elements, and a swoonworthy romance!

If I recall correctly, I initially picked this up because Moreno-Garcia was on my radar, since she’s one of the editors of The Dark Magazine, where I’ve published two short stories. I had been wanting to read something of hers and this seemed like it would be most suited to my tastes. I hadn’t realized it was a Regency Romance with a Telekinetic Twist (as the author markets it!), and I hadn’t thought I would love it this much, but it’s definitely one of my favorite books of all time.

I’m actually going to tag people, because why not!