APRIL 10TH – Top 5 Books I Loved That Others Didn’t

I am super late to the party as usual, but I really wanted to do this one, so here I am! Not all of the books below are universally hated; in fact, most of them are just unknown or obscure. It’s actually made me wonder about what I might be missing out on now that I tend to read newer and buzzier books. I am super influenced by Goodreads ratings whether I want to be or not, but of course those ratings are not always going to be an accurate predictor of my own enjoyment of a book. I don’t know! I’m not really saying anything in particular here, just that I’m glad I picked up these books when I did!

The Girl in the Road by Monica Byrne. I’m not gonna lie, this book is hella weird. It takes place in an ambiguous future where India is connected to Africa via a weird energy bridge called The Trail. One woman decides to embark on this dangerous journey.  In the other perspective, a girl from a different time is on her own journey in Africa, with a beautiful and enigmatic woman named Yemaya, after the Nigerian sea goddess.  The two women have a surprising and harrowing connection. This is not usually the type of book I read, but I was very intrigued by the concept and the setting! It’s not often futuristic books like this are set in Africa. I don’t even know if I truly understood everything here, but I found it very thought-provoking and moving.

Dreams of Shreds and Tatters by Amanda Downum. I am honestly surprised this book has such a low rating! This is a super, super creepy story influenced by Robert W. Chambers’ The King in Yellow, a collection of weird short stories that influenced the Cthulu mythos. Downum’s book has the sort of Lovecraftian cosmic horror that many of us are familiar with, but it’s not Lovecraftian at all! This book freaked me out and is everything I aspire to be as a horror writer. True, it’s a little slow, but it’s super diverse and really unsettling and beautifully written.

When the Sea is Rising Red by Cat Hellisen. When I finished this book I remember being stunned by how much I loved it and how refreshing it was. Though YA fantasy, it seemed apart from other YA fantasy books, playing with and subverting families tropes. The main character runs away from her wealthy family and becomes attached to a boy who is a street lord. She also meets a vampire and it feels like a love triangle. It sounds suuuuper lame and tropey, but somehow it’s not? Everything is subverted? It’s got this really mature and engaging tone and it’s literally the most atmospheric book I’ve ever read.  Oh, and the sequel? Incredible. 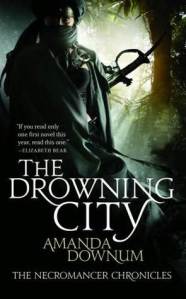 The Drowning City by Amanda Downum. Yes, Amanda Downum again! She is one of my all-time favorite authors and I think she is ridiculously underappreciated. The Drowning City is an adult high fantasy about a political spy, but it’s set in a world that’s completely gender neutral. As in, men and women are completely equal; sexism is not a thing. I didn’t even know I needed that until I read it; it was so unbelievably refreshing to see female characters in so many roles usually reserved for men and to not have anyone comment on it one way or another. The setting is rich (inspired by the author’s time in Southeast Asia!) and the writing atmospheric. Yes, it’s a bit slow, but I loved it, and her second book in this series is even better.

The Beautiful Ones by Silvia Moreno-Garcia. This book has a decent Goodreads rating, but not nearly enough love and recognition, in my opinion. Basically, this book is a better written Jane Austen novel with a touch of fantasy. Moreno-Garcia writes beautifully, with elegantly crafted sentences that hearken to the 19th century (which is when the book is set) without overwhelming or mystifying you with period language. This is a character-driven romance, which is usually the type of story I run far, far away from, but it actually ended up being one of my favorite books of 2017, if not a contender for absolute favorite. This is the sort of book I can see myself curling up with and reading again and again just for the pleasure of it.

6 thoughts on “Top 5 Tuesday: Top 5 Books I Loved That Others Didn’t”