JANUARY 9TH – Top 5 series I want to start this year

I’m generally not especially good with series unless they really, really wow me. I find that most series don’t really need to be series, or at least don’t need to be as long as they end up being. Furthermore, I have a really, really crappy memory, so I often need to wait until the entire series is out so that I can read it all at once, which is kind of annoying. I don’t always dislike series, however – there are some series that I wish would stretch longer, because I love them so much! Fingers crossed that the ones I talk about below turn out to be like that!

The Raven Boys by Maggie Stiefvater: It is nearly impossible to exist in the YA book community and not have heard of this series.  I have seen so many people praising it to the high heavens that I absolutely have to look into it to see what all the fuss is about! I’ve never read anything by Stiefvater at all so I have no idea if I will like this. My initial hesitation had to do with the fact that there’s only a single female character in a group of four boys (i.e. The Reverse Harem Trope) and they’re all (afaik) white. But hey, so many people love this series, there’s no way it can be as run of the mill as it sounds, right?

The Diviners by Libba Bray: OKAY, so technically I read The Diviners back in 2013. I remember loving it. Unfortunately, the only other facts I remember about it is that the protaginist is a girl named Evie who has visions and there’s some kind of creepy religious stuff going on. Literally, that’s it. This is what I mean when I say I have a terrible memory. I was planning on starting this series again in February or March, but that was when I thought it was complete. To my dismay, there is to be four, not three, books in this series, and the fourth book is so far from being released it doesn’t even have a title yet! So perhaps this series will have to wait until later in the year, so that I can actually remember things when reading the final book! (Also, god, look at that first cover. It is such a tragedy the other books’ cover designs were changed into such crap.)

Eon by Alison Goodman: Last year I read the first two books in the Lady Helen series by this author and fell absolutely in love.  That’s really the only reason I’m determined to read this series, because otherwise the 12-year-old protagonist and the dragons would be off-putting to me (I know, I know, what fantasy enthusiast doesn’t like dragons?). However, I’ve heard that the series is mature and polished, and I already know I like Alison Goodman’s writing, so here’s hoping I will love these as much as the Lady Helen series! 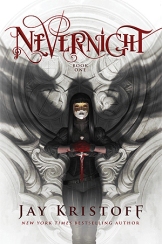 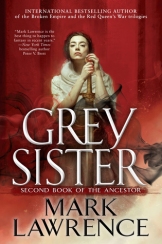 Nevernight by Jay Kristoff & Book of the Ancestor by Mark Lawrence: I’m putting these two together not just because they’re the only dudes on this list and because I can’t choose between them, but because I discovered these series at around the same time and am literally always getting them mixed up. The plots strike me as rather similar to one another, so I’m lumping them together. I’ve already gotten Nevernight out of the library so hopefully I’ll get started on that soon.

Stalking Jack the Ripper by Kerri Maniscalco: I’m…somewhat dubious about the quality of these books, but I’ve been on a real Victorian London kick recently, so I’ll read nearly anything that takes place in that setting, especially supernatural stuff.  The books sound like they’ll be right up my alley so I’m not sure why exactly I’m dubious, but I am. I am really hoping they exceed my expectations and  turn out to be well-written and without a dreadful romance plot that drags the whole thing down!

5 thoughts on “Top 5 Tuesday: Series I Want to Start This Year”