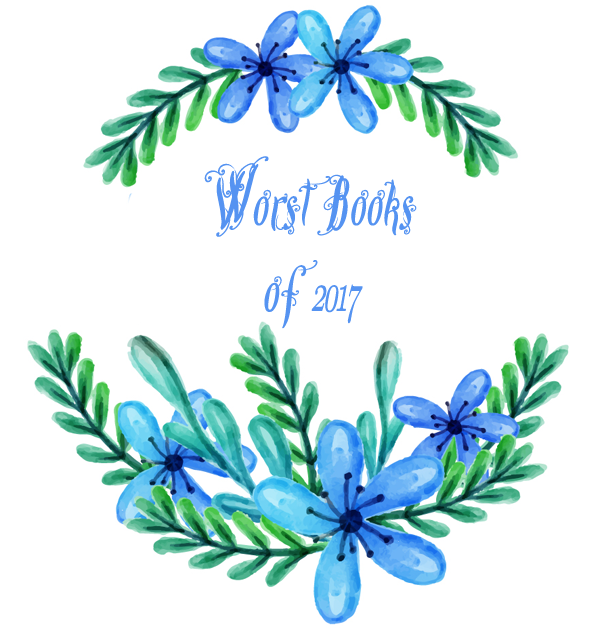 It’s time for a compilation of the worst books I had the displeasure of reading in 2017! I’m not quite done reading for the year yet, but there’s no chance either of the two books I’m reading at the moment will make his list.

Before I start the countdown, I have to give a shout-out to The Thief by Megan Whalen Turner and Witchtown by Cory Putnam Oakes.  Though they did not make the official list, they were both still absolutely terrible.  The Thief, though decently written, was mind-numbingly dull and uneventful.  Witchtown was a book with a ton of potential, but ended up being a very white, very boring, very forgettable novel. I legitimately do not even remember what this book was about. That’s how forgettable it was.

And now — drumroll please!!! — we begin the countdown!

5. Shimmer and Burn by Mary Taranta: This was a book I really thought would be at least four-stars, but unfortunately it did not work for me at all. The main reason is because this book is hella confusing. Nothing is properly explained, not the magic system, not character’s motivations, not the plot…nothing. None of it makes any sense. Things happen because they just do, with no rhyme or reason to anything.  There’s your standard Inexplicable Heterosexual Romance featuring instalove, Sisterly Love that we were constantly told about but never shown, and an Evil Villain who is cartoonishly bad. It’s sad, because when this book started out it seemed like it was going to be doing something unusual, but then it devolved into your standard YA fare, and it wasn’t even enjoyable.

4. An Untamed State by Roxane Gay: All I remember about this book is intense sexual violence written incredibly in an incredibly exploitative, gratuitous, and voyeuristic way.  I have scenes forever burned into my brain and I so wish I could scrub them out.  This is a novel that has no idea what it wants to be. An exploration of classism? A family drama? An examination of an interracial marriage? An examination of the immigrant experience? A study of PTSD? In the end it ends up being a little bit of all of those things, and they’re all pretty much terribly written.  The writing in this book is awful, the plot is contrived, the characters are cardboards.  The sexual violence depicted is almost titillating, and it is depicted over and over and over again for no reason.  I like a lot of what Roxane Gay has to say as a feminist and I’ve never read any of her non-fiction work, but I am of the firm opinion that her fiction debut is terrible.

3. Roar by Cora Carmack: This book was one hell of a disappointment.  The book starts off well enough, with fascinating worldbuilding (potentially! sentient! natural! disasters!), but soon enough devolves into a gross, misogynistic Inexplicable Heterosexual Romance.  The main character is consistently fetishized by the men around her, and her “love interest” happens to be turned on by her resisting his physical force. The plot? There is no plot.  Random things just happen while these two talk about how much they want to get it on.

2. The Bloodprint by Ausma Zehanat Khan: And now for the greatest disappointment of all. Of all the books that came out in 2017, I looked forward to this one the most. I even bought a hard copy of it, because I thought I would love it that much. Instead, from the very first page I struggled to connect to it.  Though the worldbuilding is intriguing, it is not properly constructed or described, so many things become confusing. The plot is so boring I literally had to force myself to keep reading. I didn’t care about the characters or anything was happening. There is an Inexplicable Heterosexual Romance that undermines whatever feminist message this book was trying to send. Overall, just a really poorly executed novel.

Desolate by Amy Miles: This book is rape and torture for 288 pages.  The main character is married to some dude who then proceeds to murder her entire family and then whisk her off to his castle to be tortured and raped by him and his brother. Why, you ask? The author clearly doesn’t need reasons! Logic, who needs it? Nothing in this book makes any sense. It’s just gratuitous violence over and over and over again.  There is no semblance of plot.  None. And even in the midst of this nightmare the author manages to sneak in an Inexplicable Heterosexual Romance with a random dude who just happens to be the only Good Guy in the entire book.  This is not only the worst book I’ve read this year; I’m pretty sure this is the worst book I’ve read in my entire adult life.