I thought this topic would be difficult,  but it was actually rather easy! I ended up finding about eleven books I adore that don’t feature romance at all.  Narrowing them down to five was actually the hard part.

The Queen of Blood by Sarah Beth Durst: This rich adult fantasy set in what appears to be Avatar the Last Airbender’s Spirit World.  Spirits inhabit nature and select women have the ability to control them.  These women train and then compete for the chance to be the next queen.  One of these women is Daleina, who loses her entire village at a very young age to an attack of spirits.  She is not particularly talented, but she is especially determined, and her progression from young girl to competent woman is something to see.  Now, there is a relationship in this book, but it features so little it’s almost tossed in as an afterthought.  Much of the book focuses on Daleina’s growth and training.  The most prominent relationship is between her and her trainer, which is kind of a father-daughter dynamic. 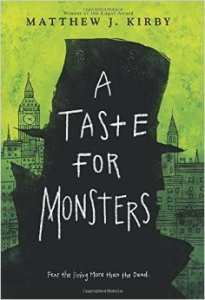 A Taste for Monsters by Matthew J. Kirby: This is an interesting historical fiction novel about Joseph Merrick, more popularly known as the Elephant Man, an Englishman who exhibited severe deformities.  The novel is written from the perspective of Joseph’s nurse Evelyn, who also suffers a deformity.  The two develop a powerful, touching friendship that becomes the crux of the novel.  While this book does become somewhat repetitive after a while, it writes very descriptively of nineteenth century London and features many interesting and layered characters.  I also think it’s quite a refreshing idea, fictionalizing a short time period in the life of a man who was known only for his appearance in freak shows.  It humanizes a historical figure through the eyes of a similarly anguished female character. 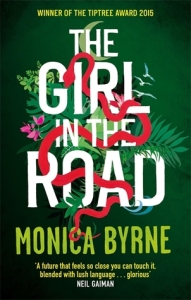 The Girl in the Road by Monica Byrne: I barely know how to describe this book.  It follows a young Indian girl named Meena, who decides to return to her birthplace of Ethiopia by traversing The Trail, a strange energy-type bridge that connects India to Africa over the Arabian Sea.  Her perspective is interspersed with that of Mariama, a young girl from Western Sahara who journeys across the Sahara with an enigmatic woman named Yemaya.  This is a very strange book set in a very odd future.  There is no romance whatsoever because the plot is entirely focused on these two women and how their worlds come to intersect.  The end left me absolutely reeling.  I feel like I have to go back and re-read this book twice in order to fully understand it and comprehend all the symbolism and analogies.

Dreams of Shreds and Tatters by Amanda Downum: In an homage to weird fiction, this horror novel brings forth Carcosa and the King in Yellow.  Liz Drake, a woman with prophetic dreams, journeys to Vancouver to rescue her friend Blake from the clutches of the Yellow King. In her dreams, which are quickly becoming real, she must journey to the mysterious Carcosa to pull Blake out.  This novel is thrilling and bloody and will send shivers down your spine.  Liz is in a relationship, but it’s a minor point in the book.  More prominent is Liz’s friendship with Blake and her increasingly disturbing dreams of Carcosa that are swiftly transforming her reality into a phantasmagoria she can’t seem to escape. 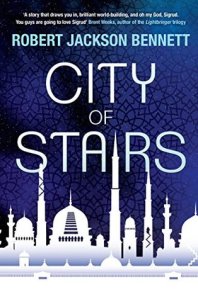 City of Stairs by Robert Jackson Bennett: Shara Thivani, a spymaster posing as diplomat, journeys to Bulikov, a city that ruled the world before its Gods were killed, in order to investigate the murder of a historian.  Her search leads her to suspect that perhaps Bulikov’s Gods are not as dead as they seem.  City of Stairs debuts an incredible female character in Shara, and the world-building is dense and original.  In particular the focus on religion and Gods was intriguing and chilling.